We work daily to raise the bar on quality of life by creating sustainable systems at home and at origin. Our commitment to smallholder coffee farmers and our sourcing principles are rooted in dignity and solidarity. SInce 2012, Thread Coffee has worked to elevate farmers and empower women at origin and in Baltimore. We build and maintain relationships with farmers through a model of transparent trade built on dignity. We pay above fair-trade prices and reinvest in our farmer communities each year. We strive toward egalitarian governance in our worker-owned model by prioritizing women, queer and POC in our hiring practicies. Sustainability in the coffee supply stream must include all hands lifting up their neighbors and communities. We know that woman cannot live on coffee alone.

Thread Coffee formed in 2012 among friends who wanted to come up with a way to stand in solidarity with different social movements around the world. Our first relationship coffee was with the autonomous Zapatista coffee community in Chiapas, Mexico. Years later, we continue to purchase coffee from those same farmers, and have added more direct trade coffees to our offerings. We stand in solidarity with women and indigenous smallholder farmers around the world.

In 2014, we partnered with Baltimore collective Red Emma’s and became the in-house coffee roaster for their popular vegan restaurant/cafe and bookstore. Between 2014-2017, we grew our wholesale coffee business and continued to grow our commitments to our farmer partners. We expanded our services to include cafe build outs and partnered with Johns Hopkins University and Bon Appetit food service to provide fair trade organic coffee in their university local Real Food campaign.

In 2017, we moved into our new and larger roastery in the mixed-use makerspace in Open Works in Baltimore’s Greenmount West neighborhood. In 2019, we released our first ready-to-drink beverage, our nitro cold brew canned coffee. We were named Best Coffee in Maryland by Food and Wine Magazine in 2019, as well as several notable mentions in Bon Appetit, Sprudge, Daily Coffee News and Roast Magazine.

Nani has been working in specialty coffee since 2012. She started as a barista in a small Brooklyn coffee shop that featured Crop to Cup coffees. There she learned to pour latte art and how to properly brew coffee. She went onto roasting, production, and education for Joe Coffee and Nobletree in NYC. She was the Lead Educator and Sales and Marketing Director for Unique Coffee Roasters in Staten Island, NY. In 2017, she moved to Baltimore, MD to work with Woodberry Kitchen, Artifact Coffee, and Bird in Hand as coffee director and manager. Now at Thread, she works in roasting and sales. When not working, Nani is an activist, writer and musician.

Holly grew up in the UK, and still remembers drinking her first cup of black coffee at the tender age of 11, a stone’s throw from Dracula’s castle in Whitby. Years later in Chicago, she became a barista on the side of adjunct work and anti-war activism, but soon got swept up into the third wave and fell in love with the coffee craft. Now a roaster and barista at Thread, she relishes a Chemex of Fero, and enjoys a democratically-run workplace. At home, she reads Kafka, draws comics about a rabbit girl, and looks at her corgi. 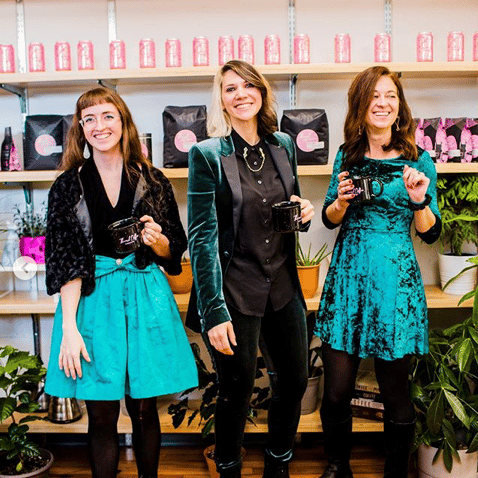 Thread Coffee formed in 2012 when three people got together and decided they wanted to come up with a way to be in solidarity with different social movements. Luckily, they also all shared a deep passion for coffee.  Combining those two things together, Thread Coffee was born.

Thread Coffee works to create relationships directly with farmers, ensuring that producers receive a just price for their beans, and that their coffee is grown in a way that’s good for both the environment and the culture. Thread goes above and beyond fair trade standards to provide a model of trade that is more than just a logo. More and more farmers are expressing that fair trade minimum standards are not, in fact, fair. Thread strives to build a better model by:

In striving to create a better model of trade, transparency is key. Thread works to provide information about our coffee’s journey every step of the way. All of our contracts and financials are open and available to the public.

Many different social movements throughout the world have turned to coffee as a means of supporting their autonomy. From the Zapatistas and Las Abejas of Mexico, to the women in the Democratic Republic of Congo, we seek to work with farmers we want to stand in solidarity with.